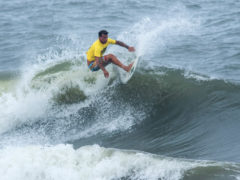 2019 went down with redemption in several forms: First, other than a few drizzle moments on Saturday we ended with great weather. That is in contrast to last year’s event… Read more »

Traditionally, luckily, “by the grace of God”, “Don’s luck (of the Irish?)”, … whatever it is, it’s blessing the Belmar Pro again with contestable waves despite being in between spinning… Read more »

One of the great things about the annual, long-running Belmar Pro is that it is a several day event that includes after parties to keep the vibe, spirit and fun… Read more »